Who doesn’t love politics?  The latest in the round of IronViz feeders from Tableau features this as the theme.  I’ll admit, it was hard for me to be enthusiastic about politics at first, but after a scavenger hunt for political data, I came across something that had me excited to tell a story: 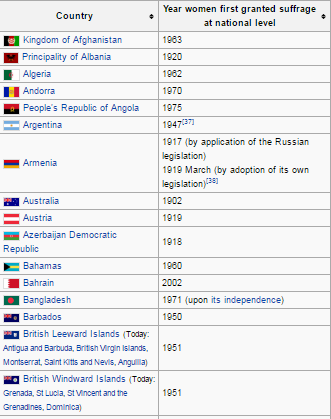 As soon as I saw this table, from the Wikipedia article on Women’s Suffrage, I knew there was a fascinating data story to be told. 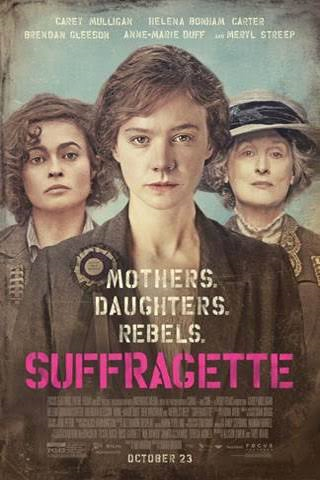 And it triggered the memory of watching the movie Suffragette with my wife – a compelling film that highlights the struggle faced by women seeking the right to vote in equality with men.  Watching the film made that struggle seem real, but it wasn’t until the end (SPOILER ALERT), right before the credits, that you get a list of some select countries and years when women finally achieved the right to vote that brings home the movie’s final message: Suffrage wasn’t just a struggle way back when, it has been a struggle in recent years too.  You see years such as 1983, 1999, and 2015.

The problem with the table (and to a lesser extent, the list in the movie) is that they hide the story.  The countries in the table are in alphabetic order, which makes it easy to find one if you want, but there are questions where some data visualization might reveal insight that the table and list cannot:

Right from the start I had an idea of the type of visualization I wanted.  Now, that’s a little unusual for me, because I almost always use Tableau to explore the data first, creating several or a dozen visualizations until the story becomes clear.  But here, I had a feelingthat I wanted to use a Gantt chart with a row for each country showing when voting rights were achieved by women in that country.  I had an image in my mind, something like:

It took a bit of data cleansing and manipulation to get the data into shape (I’ll save the technical stuff for other blog posts). And then, when I visualized the data in Tableau, the results were even more compelling than I’d imagined!  The underlying story was engaging.  But even with a basic visualization, I had to decide: how as I going to present the story?

The first question I faced:  the story can be told either from a historical perspective (what countries existed historically) or a contemporary perspective (what countries exist today, even if at the time of suffrage they were part of some empire or kingdom).  I chose to go with a slightly hybrid approach (much like the table from Wikipedia) which allows the story to start with a historical bent, but end with a relatively modern view of the world.

And with that, I faced another decision: I could give the end-user some kind of interactive dashboard or even a static visualization that told the story all at once, or I could reveal the story as it was told.  Most of the time, I love to give the user interactivity and allow them to explore whatever they want because it encourages the user to become engaged, ask questions, and seek answers on their own.

But in this case, I really wanted to user to experience the story as it unfolded – to feel the long wait endured by so many who longed for equality.  I didn’t want them to see the end of the story without experiencing the beginning and middle (notice that I haven’t used screenshots of the actual visualization in this post? I want you to experience it in order too!)

And so, it occurred to me to animate the story, something like this:

This allows the user to see the beginning of the story and experience the progression and long delays in equality before seeing the state of the world today.  It builds anticipation and excitement.  The danger, was that there are some very long delays and the observer might become bored…  So ultimately I compromised and used varied speed (with indication for the user).  I used the Pages shelf in Tableau (in my humble opinion, the most underused shelf), but I’ll save the technical details of how I accomplished the animation and automated in a dashboard for a later post.

And finally, I organized everything into a story that encourages multiple levels of interaction and thought from the user.  You’ll see that in the flow of the Story in Tableau:

Questions, comments? I love to hear from you!  Let me know your thoughts below!