A few years ago, a colleague of mine sent out an email asking if anyone was interested in serving as a technical reviewer for a Tableau book.  I was becoming quite involved as a helper in the Tableau forums and so I jumped at the opportunity.  Reviewing was a fun process of reading initial drafts and making comments and suggestions.

Then, about this time last year, the publisher contacted me and asked if I’d like to write a Tableau book. After discussing with my wife, I embarked on a journey – one which involved more effort and reward than I ever imagined.  The title Learning Tableau, selected by the publisher, is far more appropriate than I had first thought.  Not only does it express my hope that readers will learn to use Tableau effectively to gain insights into their data, but it was a process of learning for me too. 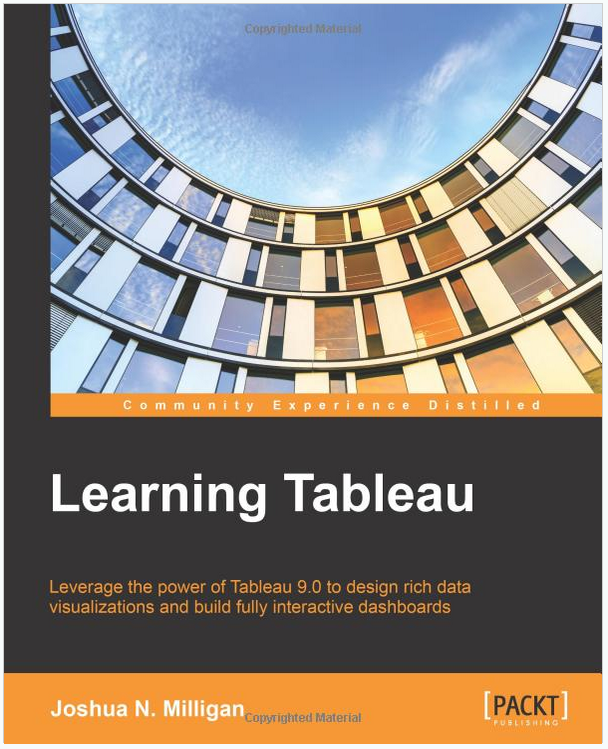 Very early on in the process, Shawn Wallwork (see his Tableau blog here), who graciously agreed to serve as a technical reviewer, asked me what my goals were in writing a Tableau book.  It was an opportunity for me to examine my motives.  Was it fortune?  Fame?  Well, fortune didn’t seem likely as most technical books don’t sell a very high number of copies.  Fame also seems to be elusive for the technical writer.

Instead, I clarified my thoughts with these goals:

And what I meant when I told Shawn that was that I wanted to write a book that would give readers the foundational concepts necessary to understand how and why Tableau fundamentally works– the underlying paradigm – and how to think “in Tableau”.  It wouldn’t just give a set of steps to memorize nor would it be a dry reference guide of concepts.  Instead it would be a blend of practical examples and fundamental understanding.  It would then build toward some advanced concepts and leave the reader with a solid foundation on which they could continue to build.

The Challenge and the Help

When I agreed to write the book, I never anticipated how challenging it would be.  I love Tableau training and mentoring.  When I teach a Tableau class, nothing is more rewarding than seeing my students light up with understanding.  But when something isn’t clear for a student, they raise their hand and ask the question.  When I answer a question on the Tableau forums, I usually get a response of “right”, “wrong”, or “kind of, but…” within a day or two.  When I sit down with a business analyst or executive to iteratively build visualizations and ask and answer questions there is immediate feedback.  If something doesn’t look right it gets fixed on the spot.

But a book is different type of training experience.  The author doesn’t receive immediate feedback.  The reader won’t see the written words for months and if there is a mistake, a mis-statement, or an unclear passage it will be too late to correct it after it is published

That’s where the technical reviewers step in.  I had four: David Baldwin, Sagar Kapoor, Joshua Kennedy, and Shawn Wallwork.  The reviewers would go through each draft of the chapter offering suggestions, corrections, encouragement, and other helpful feedback, like this early iteration: 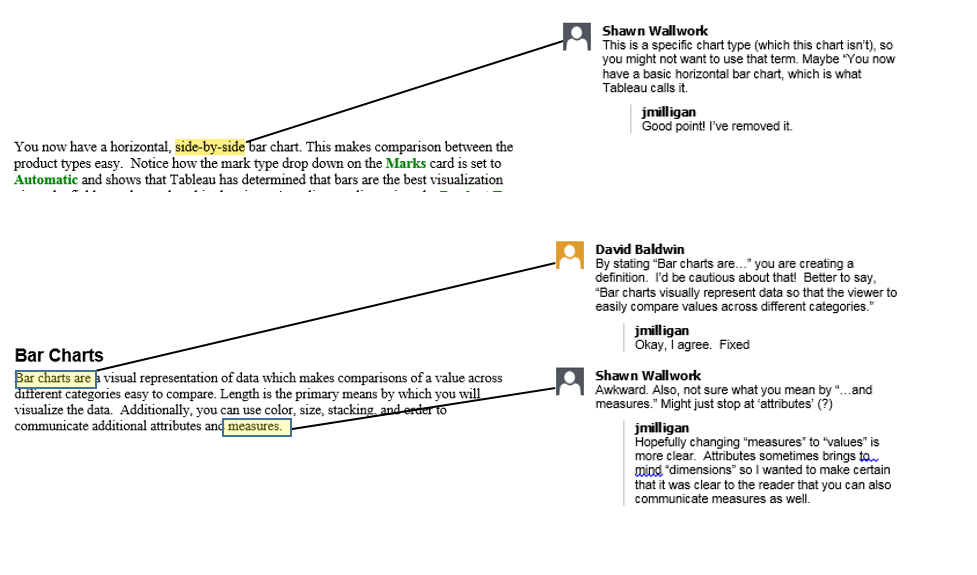 I never knew how much of a team effort writing a book really is.  I am forever in the debt of the reviewers.  Indeed, without the reviewers, publishers, editors, and many others, the book would not have been possible.

I also never imagined how rewarding the end-result would be.  I love helping and empowering people with Tableau.  Most of the time the feedback is immediate and very gratifying.  On the other hand, writing a book is mostly a process of imagining how helpful each chapter will be.  And in the middle of typing page after page and building out sample data sets and workbooks, there were times when I was ready to be done.

But now the writing is done, the book is published, and people have started to read it.  And the feedback from readers and the Tableau community has been overwhelmingly positive.  I have received notes, reviews, emails, and personal thanks from many who have found the book to be helpful in their understanding of Tableau.  I am deeply thankful to everyone who has offered support and encouragement at every step along this journey. 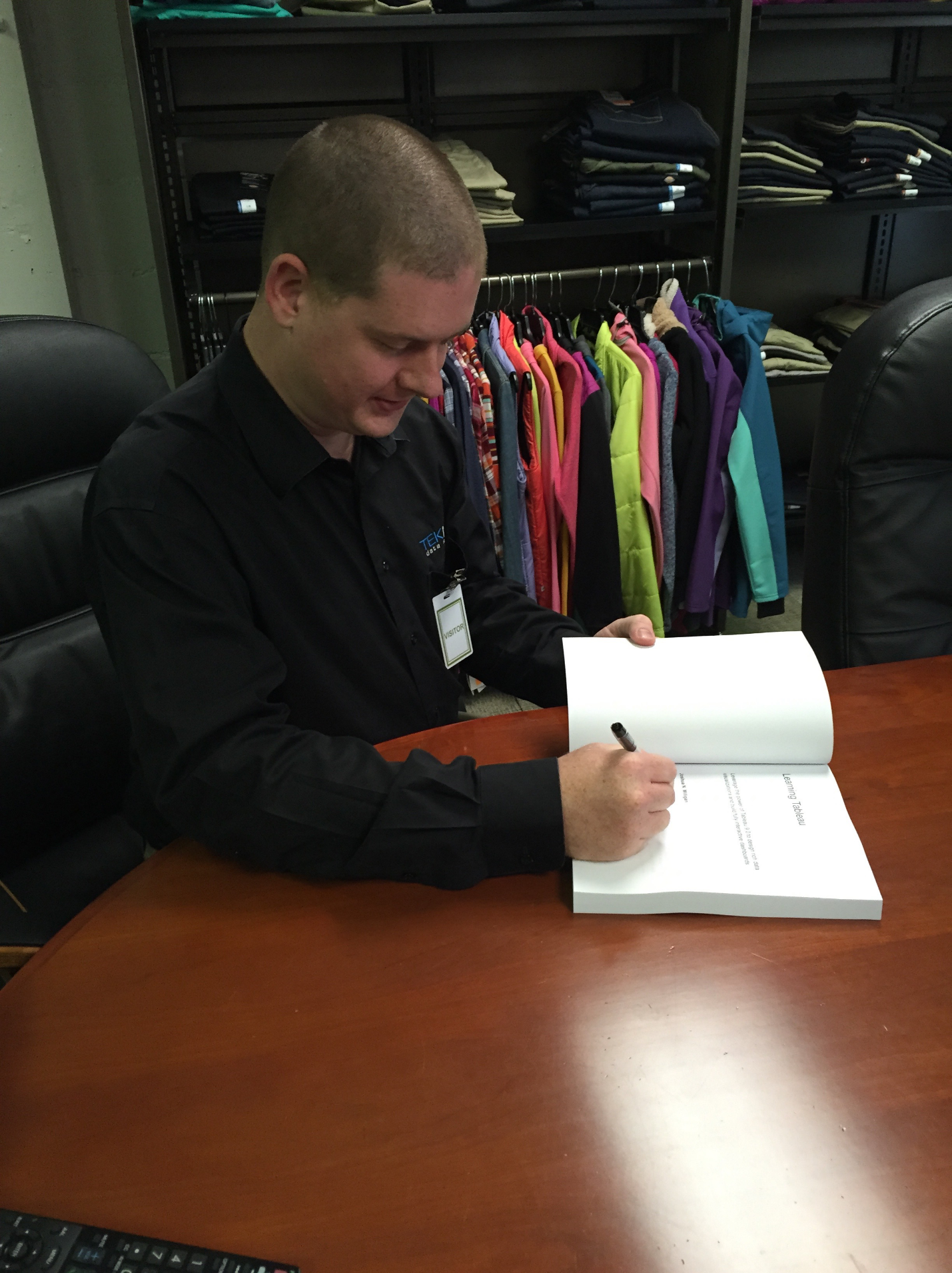