As I’ve been beta testing Tableau 10.0 and working on a new edition of Learning Tableau, I’ve been making all kinds of little discoveries.  Big new Tableau 10.0 features like clustering, cross database joins, cross data source filters, union updates, Google Sheets are exciting!  But little tweaks, cool UI additions, and little new features the Tableau developers slipped in, all without making a big deal about it in official “New Features Lists“, are equally fun to find!

So, as Tableau 10 nears deployment I’ll share some of the cool “little” things that I’ve noticed and feel free to share the little things that you notice too!

I’ll start with a little thing about Clusters, which is quickly becoming my new favorite feature. (If you want a good introduction to the concept in Tableau, check out Bora Beran’s blog post).  Since a cluster is a partition of the data by definition, I wondered if I could use the special Clusters field that Tableau generates as a partition in a table calculation (without first having to materialize it as a group).  Sure enough, I can, which enables me to build a view like this: 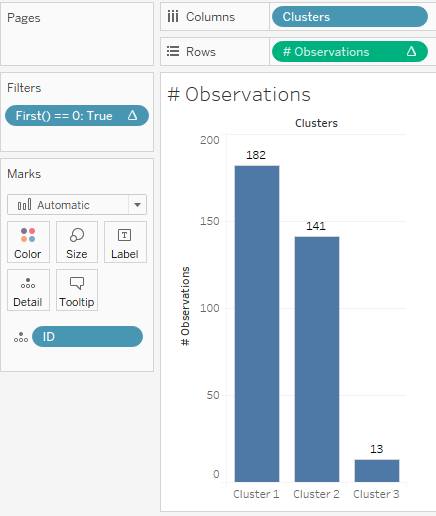 Nice! Now I can quickly see how many observations fall into each cluster, while keeping the clustering dynamic (so I can add variables and change the number of clusters as I desire and see the view update as I do so).

You want to make a similar view?  [# Observations] is simply the Size() function wrapped up so it only has to be calculated once:

And the filter you can see.  Each are calculated along ID (using ID for addressing and Clusters as the partition).  And that just scratches the surface of what you might do.  I love the fact that the Tableau developers made sure a new feature (Clusters) worked with an existing feature (Table Calcs).  Tableau really is an outstanding platform and behind it is a fantastic team!