Having never previously entered into the Tableau #IronViz feeder contests, I was eager to participate this year. The category of the first contest: Food!  That’s a broad topic and the rules indicated that any data set was allowed as long as it was “tangentially related” to food. (By the way, if you like my viz, I’d certainly appreciate your vote: Tweet #IronVizjmilligan )

I’ve previously written and spoken about the roles “Fun” and “Serious” play in data visualization and data storytelling.  And my first thought was to have a lot of fun with this topic: food fights, delicious donut charts and pie graphs, funnel (cake) charts, and more!  But the more I thought about the topic, the more my thoughts turned serious and I realized there is a story to be told about the less fortunate for whom the struggle to get enough to eat is real.

My research led me to the International Food Policy Research Institute which publishes the GHI (Global Hunger Index) based on data collected over decades for numerous countries for four primary measure.  As the institute’s website indicates:

To reflect the multidimensional nature of hunger, the GHI combines the following four component indicators into one index:

The exploration and analysis phase of my work with the data helped me see how important each of these measures are.  However, as I began to consider how to tell the story, I realized I wanted to tell the specific story of undernourishment, with a secondary emphasis on child mortality.  My goal in sharing this story and allowing the audience of the dashboard to explore the numerous stories of individual countries is to give perspective on the status of global hunger and a look at where food is scarce…

(Also, thank you Bridget Cogley for the blog post at Tableau Fit that demonstrated the minimalist maps technique!) 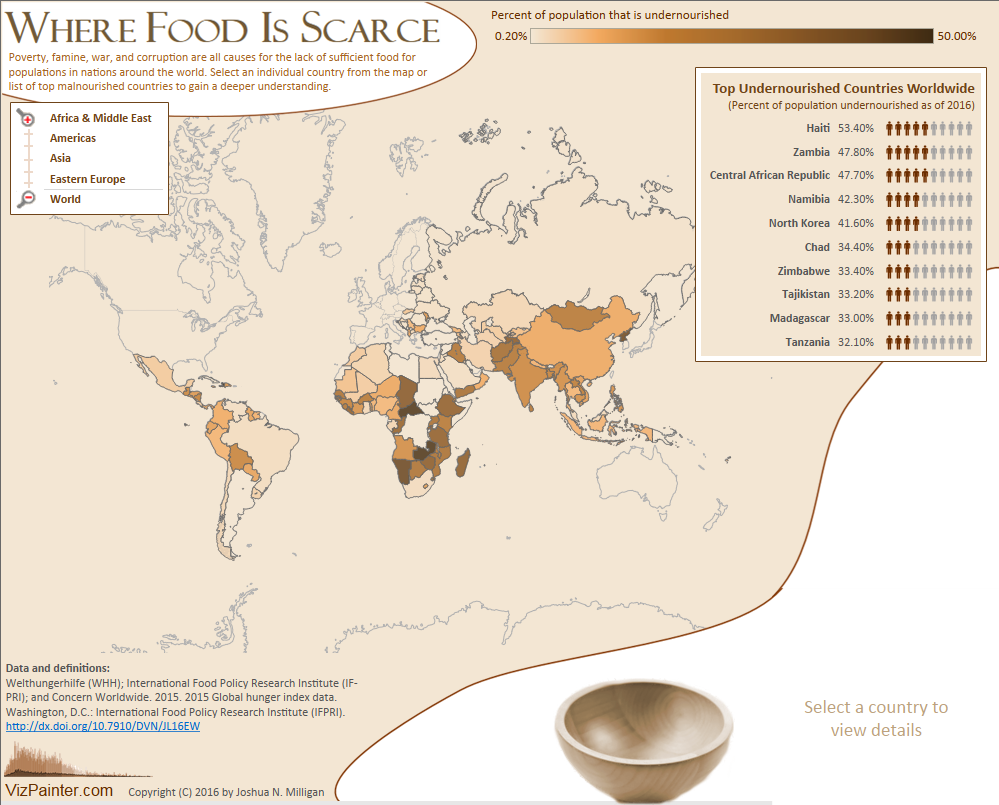